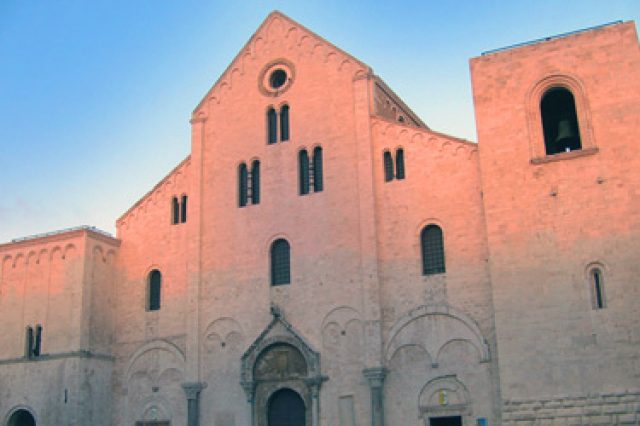 St. Nicholas Basilica is open daily from 7am to 8pm and Sunday to 6pm.
Entrance to the museum costs € 3 with full ticket and € 2 with reduced ticket.

The Basilica of St. Nicholas, in the heart of the old city of Bari, is one of the most striking examples of architecture in the Romanesque Puglia. Romanesque style was built between 1089 and 1197 during the Norman rule. Tradition wants the Basilica to be erected following the arrival in Bari of a group of Baris sailors (parties to Myra in Turkey) holding the remains of St. Nicholas. The realization of the Church is linked to the will to host and guard the relics of the saint (deposited in a Benedictine Abbey on May 9, 1087), whose veneration also concerns the orthodox dimension. Legends say that the basilica was actually built to conceal Sacred Grail, the cup from which Christ drank in the Last Supper day with the apostles. At the base of this legend, Bari was the harbor from which crusaders and savage people left for the holy land, so it was considered a city on the margins of the empire, but at the same time it was filled with sacredness. St. Nicholas of Myra is one of the Saints to whom Orthodox Christians, especially Russian, reserve particular devotion.

With the fall of the Soviet bloc and the consequent opening up of eastern Europe to the west, the Basilica has represented and still represents one of the most important points of tourism related to religious pilgrimages. Its privileged destination for the two Churches marks the encounter between Greek-Orthodox culture – which has strongly influenced the whole region throughout its history – and that Roman Catholic.

The seal of the loving and fruitful ecumenical exchange is the orthodox rite celebrations that are held every day of the year in the basilica crypt, next to the saint simulacrum. The secular flow of pilgrims allowed the creation of a “treasure” consisting of gifts (often in precious materials) that they carried in the Basilica as a sign of devotion to the saint who was worshiped.