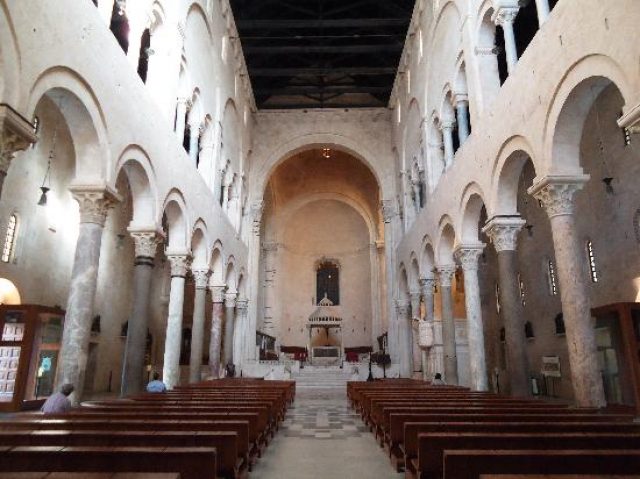 Another building to be admired along with its beautiful crypt is the Cathedral of San Sabino (1170-1178), in its archives there is a famous Exultet (miniature code) datable around 1025. It was built between the XII and XIII centuries, probably l the last thirty years of 1100, on an older place of worship, that is, on the ruins of the Byzantine Cathedral destroyed by Gugliemo I called the Malo (1156); To the right of the transept you can see traces of the original floor that extends below the central nave. The Diocese in Bari Cathedral, in fact, dates back to the Bishop Concordio, who was present at the Roman Council of 465. The ancient episcopal church dates back to at least the sixth century. Underneath the nave you will find the remains of an ancient church, dating to a period before the first millennium. This is structured in a three-nave environment, with square pillars, cruise lines constructed of stone blocks hooked with fish. Foundations were also found that indicate the presence of an apsed building whose axis was to be slightly oblique with respect to that of the present cathedral. On one of the paving mosaics an inscription bearing the name of Bishop Andrea (758-761) suggests it was the first cathedral destroyed in the IX-X century. In place of this church stands the crypt of the present cathedral, the bishop of Santa Maria, which is probably the building in question. In the first half of the 11th century, the Archbishop of Byzantium (1025 – 1035) built a new church after which Nicola I (1035 – 1061) and Andrea II (1061 – 1068) succeeded. This church was then destroyed by William the Malo, during the distraction of the entire city (it was spared only the Basilica of St. Nicholas) that he performed in 1156. Archbishop Rainaldo at the end of the twelfth century began reconstruction of the building. The relic of San Sabino, bishop of Canosa, is preserved in the crypt. Carrying the San Sabino silver bust in the capitular archive, the icon of Our Lady Odegitria is honored according to the tradition that came from the East in the 8th century, but in fact later and from the very ancient cult. In the smaller apses there are two sarcophagi: one contains relics of Santa Colomba, recently restored, and the other reliquaries. In the sacristy on the right there is an altar with a painting depicting probably San Mauro, considered to be the first bishop of Bari. The present Cathedral is therefore the result of works begun right after the destruction by William the Malo. For the work, materials from the previous church and other destroyed buildings were used. Consecrated on October 4, 1292, the church relies on the style of St. Nicholas Basilica. The building then underwent a series of refurbishments, demolitions and additions from the 18th century. During the 18th century the facade, interior of the aisles, the interior of the Trulli (the 12th baptistery of the twelfth century, today the sacristy) and the crypt were rebuilt in baroque designs by Domenico Antonio Vaccaro. The interior decoration was instead brought back to the ancient Romanesque features in the 1950s.