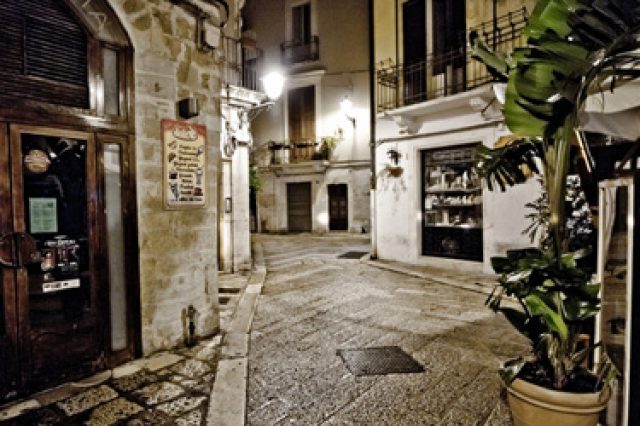 The neighborhood of San Nicola, Bari vecchia for the Baresi, lies between the two ports of Bari, the old one and the new one, overlooking the seafront and is the historic center of the city. The nucleus of old Bari dates back to the Middle Ages, is enclosed between walls and dominated by the Norman Sword Castle, which is one of the symbols of Puglia.

By getting closer to this maze of lanes it seems that little has changed: on the outskirts are the women who prepare the famous orecchiette on the planks only armed with water, semolina and knives, the houses are leaning against each other and every corner there are churches, monuments and glimpses of the sea. The Basilica of St. Nicholas is located in this area, as well as the charming San Sabino Cathedral, dating back to 1,100 and preserving, among other things, a precious medieval miniature code. Walking on the “chianche” (the big stones of the pavement) in the center of Bari Vecchia will allow you to discover at least another ten churches, in a stopping atmosphere, in a place where everyone knows and the perfumes of the kitchens mix with the breeze navy.
Do not miss the fortress of Sant’Antonio Abate, built in 1,300 for defensive purposes.

The old town of Bari or better Bari Vecchia, as the Baresi say, is the oldest part of the city of Bari, within the ancient walls, so called, since the 19th century, as opposed to the new city (whose construction began in 1813 under the reign of Gioacchino Murat).

Bari Vecchia is situated on the peninsula between the two ports of Bari (the old harbor and the new harbor), delimited south by Corso Vittorio Emanuele, while the new city extends between the railway and the coast with orthogonal lattice roads. Together they form the city’s modern city center of Bari and are gathered in the 9th district called Murat district, which is the pulsating center of the capital city of Puglia.

The ancient city (the so-called “barquecchia”) between the new and old ports is closed to the east by the walls that separate it from the waterfront and is characterized by a typically medieval urban layout. The old town, which rises on a small peninsula where the first prehistoric settlements originally developed, represents that portion of Bari’s most folkloristic, still linked to ancient traditions: it appears to be the custodian of memories and customs that in modern cities are increasingly becoming he is likely to abandon. There are notable Romanesque monuments in Bari, including the Basilica of San Nicola (XII century), a masterpiece of Apulian Romanesque architecture.

Bari Vecchia is also the center of the nightlife movement: the young people, as well as the families, are reunited along the city wall for the evening walk.